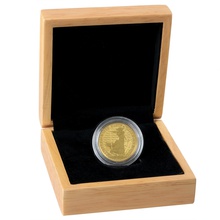 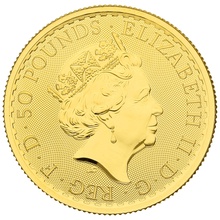 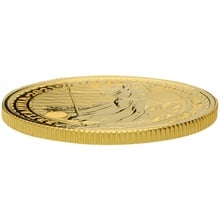 The 2021 Britannia half ounce gold coin from BullionByPost, with an attractive oak gift box.

The Royal Mint has released a new generation of bullion coins with new, improved anti-forgery technology. Special visual effects including waves in the background and a new trident/padlock hologram make this coin near impossible to replicate, guaranteeing investors true bullion quality.

As with previous years, this coin contains one-half troy ounce (15.55 grams) of fine gold and retains a face value of £50.00. Due to their status as British Legal tender they are Capital Gains Tax Free (CGT Exempt).

The 1/2oz coin has the fifth and most recent portrait of Queen Elizabeth II on the obverse side, as designed by the Royal Mint's engraver Jody Clark. In this image, Clark has Her Majesty The Queen wearing the King George IV State Diadem - typically worn for the annual State Opening of Parliament. The reverse is the same portrait of Britannia as used on the first coins in 1987, designed by Philip Nathan.