British coins have a rich history. Since the Norman Conquest in 1066, England and its neighbours used the likes of Pounds, Shillings and Pennies as the predominant currency up until decimalisation in 1970/1971. Many British coins have been produced over the past millennium, both gold coins and silver, so below we detail the various coins and their equivalent values and weights compared to other coins.

If you have a query about our collectable coins, or any of the specifications involved, then please contact our friendly customer services team on +44 121 634 8082 or email us at support@bullionbypost.eu. 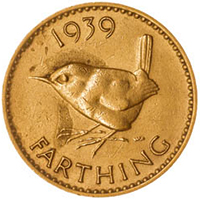 Worth: Quarter of a Penny.

The name Farthing comes from the Anglo-Saxon word 'Feorthing', which means 'fourthling' or fourth part, aka a quarter piece.

The earliest Farthings were made of silver and were first minted in the 13th Century, but later coins were also in copper as permitted by King James I. The Royal Mint changed this in 1860, when the coins changed to bronze. 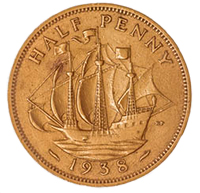 Often pronounced as a Ha'penny (hay-pa-nee), the Halfpenny coin is worth two Farthings. Like the smaller Farthing coin it was originally made from silver but, as the metal costs rose, so did the amount of coin hoarding and coin clipping (shaving silver off).

The Halfpenny was changed to be made from a mixture of metals. Older coins were made of tin with a centrepiece of
copper, but tin's greater rate of wearing down has meant many of these coins aren't in a great or even a full condition. 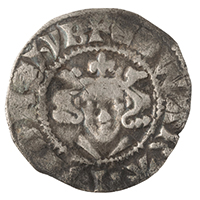 Worth: 2 Halfpennies or 4 Farthings.

Sometimes known as a 'Copper', the Penny coin was worth two Halfpennies or four Farthings. As with many older coins it started out life as a silver coin and changed to copper and then bronze in later years for cost purposes.

The symbol for Pence was d, not P. This was derived from the latin 'Denarius', which was used to describe standard silver coins in the Roman period. 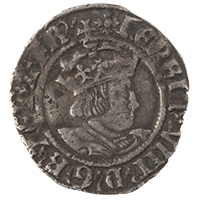 Worth: 2 Pennies or 8 Farthings.

The Half Groat coin was first introduced during the reign of Edward III and continued to be produced by the Royal
Mint until the mid 1800s.

The Half Groat coin was produced after this cutoff date for British colonies, and is still to this day produced specifically for the Maundy coinage - coins given out by the current monarch as the Maundy Thursday church service
the day before Good Friday. The coins are distributed symbolically now, but they were a royal act of charity originally. 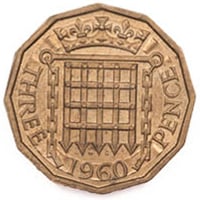 An old English word, a Thruppence or 'Thrupenny Bit' was a three pence coin. Sometimes nicknamed a 'Joey',
the coins were worth 12 Farthings or a quarter of a Shilling.

This was the life cycle of the Thruppence; popular, unpopular, popular, unpopular. Different monarchs raised it
up or quashed it to suit their economic needs, but the coins are still used as Maundy money to this day. 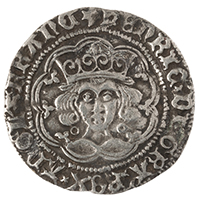 It takes no major thinking power to deduce that a Groat is worth two Half Groats. This four pence coin was very commonly used, and as such there were variations in England, Scotland and Ireland.

Groats were never quite as pure as the official specifications stated them to be; partly because of the difficulty in ensuring consistency centuries ago, but also due to the rate of production leaving little time to be picky. 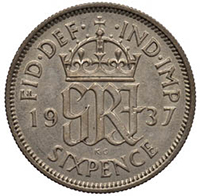 The Sixpence was a run-of-the-mill coin. The Thrupenny Bit is a quarter of a Shilling as you will have read above,
and the Sixpence is half a Shilling - also known as a 'Tanner'.

Like many coins from this period, it began life as a near-pure silver coin and slowly decreased in purity due to the
First and Second World Wars, before changing to cupronickel in 1947 and ceasing to exist after 1970, bar use as
Maundy money. The coins were recommissioned from 2016 to be made from 92.5% silver once more. 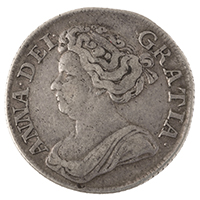 The Shilling is one of the most recognisable names of a British coin. It was a major part of the circulated currency. Popularly referred to as 'A Bob', the coin was worth 12 pence or 3 Groats.

Shillings were originally called Testoons, and first produced during the reign of King Henry VII (1485 - 1509). The name later changed to Shilling in the 1600s, though the exact date is unknown.

On paper a Shilling was denoted as 'S', but this was not for Shilling - it was in fact for the latin 'Solidus', which was
a near solid gold coin. This is somewhat ironic given that Shillings are actually a silver coin. 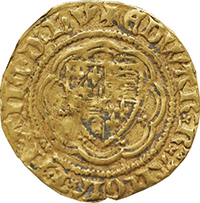 Nobles are one of the older coin varieties produced in England and the first to be mass produced.
Full sized Nobles came first, but soon after followed Half and Quarter Nobles.

A quarter Noble was worth 20 pence, which is either 5 Groats or a Shilling and 2 Groats.

Such is the rarity of the coins that we have only ever had one available at BullionByPost. 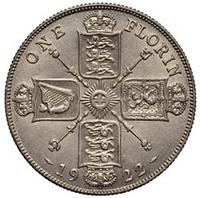 Worth: 6 Groats or 2 Shillings.

Florins, also known as a Two Bob Bit, were worth two Shillings - two Bob. They were equal to 6 Groats or 24 pence. These coins were limited in their production, with the Royal Mint only minting between 1849 and 1967 for circulation, and again producing a collector's edition in 1970 as a final hurrah.

There was some controversy surrounding the first released Florin. Like the Crown released at the time, it featured
Queen Victoria wearing a gothic crown on her head, but unlike the Crown coin it made no mention of god. Thus was
born the 'Godless Florin', also dubbed 'Godless and Graceless'.

Florins were introduced as a flexible option for the British public and businesses to use in dealing with other nations
that had already been through the process of decimalisation. 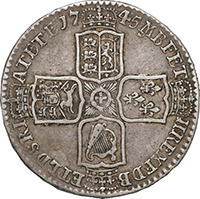 30 pence in the 18th Century got you a Half Crown, which could also be worked out as 2 Shillings and sixpence.
The weights of these coins vary but they are approximately 15g - a little heavier than a modern £2 coin.

Crowns and Half Crowns were first minted in 1549 and were produced for hundreds of years. At BullionByPost we have Half Crown coins available featuring King James I, William of Orange and Mary II, and George II. 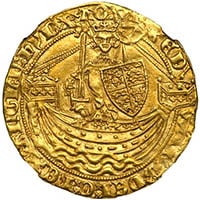 Two quarter Nobles make a half. The Half Noble was worth 40 pence, which could be achieved with Pennies
but more likely it would be 10 Groats or 3 Shillings and a Groat. 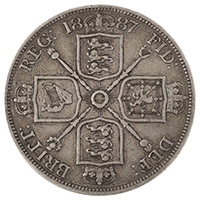 Like the single Florin, the double variety was a limited edition production by the Royal Mint, though much rarer
due to the fact the Double Florin silver coins were only produced between 1887 and 1890 - a four year window.

Double Florins weigh roughly 22 grams and were made of 92.5% silver; a common purity for the Victorian Era.
They were worth 4 Shillings or a fifth of a Pound (a Sovereign).

Crowns were worth 5 Shillings. The Double Florin was worth 4 Shillings. The coins were made of the same purity
of silver, were almost identical in size, had the same portrait of Queen Victoria, the same shields on the reverse,
and neither coin stated their denomination. As such, the coin was dubbed 'Barmaid's Ruin' or 'Barmaid's Grief'
due to the difficulty in telling the difference and the inevitable fact they will be short changed for their services.

The Double Florin silver coin is an excellent piece to add to any coin collection. 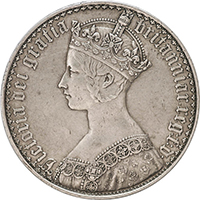 Worth: 5 Shillings / Quarter of a Pound.

A Crown was another of the big coins used in circulation in Britain. The Crown was worth 60 pence or 5 Shillings
and was occasionally referred to as a 'Dollar'. 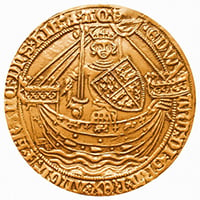 The Noble gold coin was worth 80 pence, which is an alternate value of 6 Shillings and 2 Groats or 1 Crown and a quarter Noble. Nobles were the first mass produced gold coin in England and were introduced between 1344 and 1346 during the reign of King Edward III.

It was often written down that a Noble was worth 6/8, referring to the 6 Shillings and 8 pence - the worth of 2 Groats. 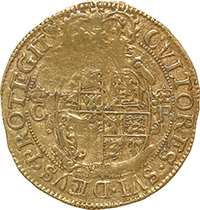 The Half Unite was the half-size version of the Unite coin; the second Pound coin to circulate in England. The Unite coins were introduced by the Tower Mint in London under the rule of King James I, who wanted to commemorate
the unification work between England and Scotland but also to regulate British currency more.

The coin was worth 10 Shillings, though in line with the value rise of the Unite coin this rose to 11 Shillings briefly. 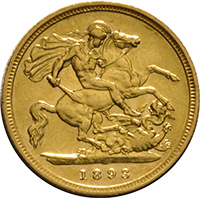 The Half Sovereign is still in use today, but it is an old coin and did have an equivalence in the old coin system
pre-decimalisation. A Half Sovereign was effectively half a Pound, and as such had a value of 10 Shillings.

The Half 'Sov' weighs 3.99g and is made of 22 carat gold. The coins were first made in 1544 during the reign
of King Henry VIII, until 1604, and then recommissioned in 1817 with the major overhaul of British coinage.

Like the full Sovereign, the coin features the monarch on the obverse and typically St George and the Dragon
on the reverse, though some years instead featured a shield back design.

At BullionByPost we have a broad range of old and new gold Half Sovereigns in stock and available today. 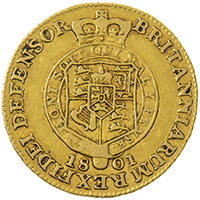 Guineas and Sovereigns / Pounds were not too different in value, but the Guinea was worth fractionally more.
This is due to the gold quality, sourced through the British Empire and colonialism from the Guinea Coast near
what is now modern day Ghana and Togo.

A Half Guinea was worth 10 Shillings and sixpence. 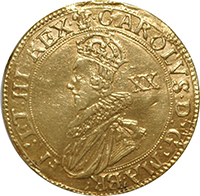 The Unite gold coin was the second oldest Pound coin, following on from the old English Sovereign. It was later replaced by the Laurel, which was the third Pound coin in Britain.

Its value was 20 Shillings, as set by the Tower Mint who produced the coins, but it increased slightly due to the
rising price of gold in Europe. The price reset back to 20 Shillings in time for the Laurel's mintage. 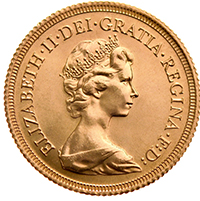 Worth: 20 Shillings or 4 Crowns

The Sovereign was the former Pound coin. There were 4 Crowns to the Sovereign, or 20 Shillings. It was typically
a split usage between Sovereigns and Guineas, with this coin being primarily used on a day to day basis.

The English Gold Sovereign was first minted in 1544 during the Tudor period, though production ended in 1603.
The Unite (see above) and then the Laurel were the next Pound coins, before British Sovereigns were introduced
in 1817 as part of the Great Recoinage. 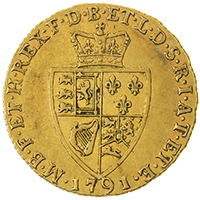 The Guinea gold coin was worth 21 Shillings or 1 Pound and 1 Shilling. As mentioned earlier, Guineas had a
slightly increased valuation due to the source of their gold. This made the Guinea an ideal coin for usage
between gentlemen and the upper classes - paying that little bit extra compared to the Sovereign showed
they were both wealthy and generous, and both were ways of earning social status in Britain. 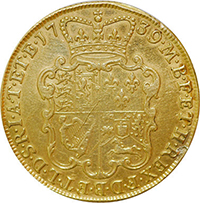 The Two Guinea coin was a rarer production than other circulated coins but not as rare as the Double Florin.
First minted in 1664, the coin was simply a larger bullion coin than the standard Guinea. Production ended in
1753 as other coins became more useful and popular.

The Two Guineas coin was around before the Sovereign, so initial Guinea values were 20 Shillings and 40 Shillings,
but with the introduction of the Sovereign this increased to 21 and 42 respectively.

The gold for these coins came from the Royal African Company and often sees the organisation represented with
elephants on these coins.


Don’t see your coin on here? Think we’ve missed a piece of history? Let us know!

At BullionByPost we’re always updating our website to be as informative as possible. Call us on +44 121 634 8082 or email us at support@bullionbypost.eu and we’ll be more than happy to tweak our content.